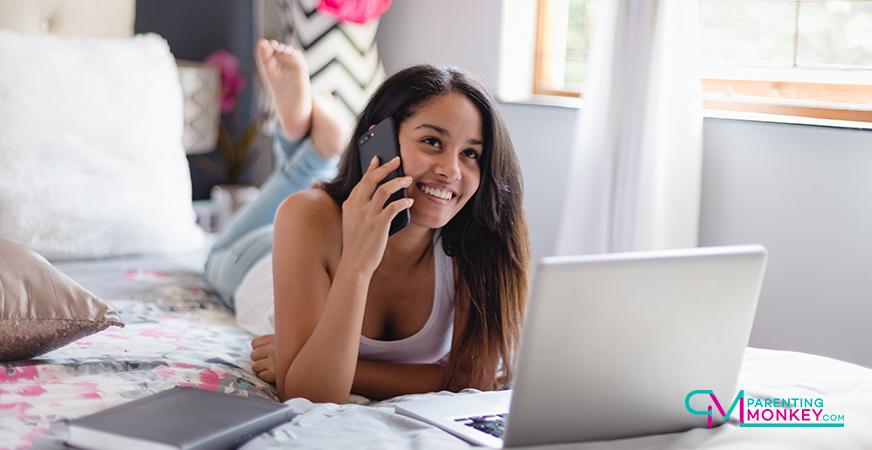 What kind of technology do teenagers need?

For most modern parents, it’s safe to say that keeping up with teens and tech is often a chore but it is definitely necessary.

Technology has dramatically changed over the past twenty years, more so because teens have greater access to it than ever before. Birthday gifts and Christmas gifts are usually tech related and as nowadays technology is a key form of communication, it’s impossible to ignore it, unless you live in a cave!

If you are struggling to keep up with what is out there, check out our best laptops for teens review and make sure your teens are up-to-date.

If you think back to twenty years ago, the biggest changes in technology were arguably the laptop and mobile phone.  Most adults in the Western World had at least one of the two, probably both.  You yourself were probably a slave to your laptop and your mobile phone

Most adults in the Western World had at least one of the two, probably both.  You yourself were probably a slave to your laptop and your mobile phone was safely stashed away in a pocket or handbag ready to be retrieved every time it started ringing or pinging!

Teenagers twenty years ago were still doing most of their communicating using their land-line telephone.  They still spent their time meeting up after soccer practice, going to the mall or hanging out at their friends’ houses.  If they did use Instant Messaging it was via their parents’ computer at home and not many teens had access to it whenever they wanted.

While technology generally heralds positive changes, there are always going to be concerns, especially for us parents.  It’s important to understand that technology is only ever going to move forward and there’s no way of slowing it down, nor should it be slowed down.  However, as responsible adults, it should always be monitored and limited where necessary.

One of the fundamental problems with teenagers and technology nowadays is the time they spend cooped up in a bedroom at home hooked up to a tablet or laptop for entertainment, or with their heads bent over a small device.

Teenagers no longer spend as much time outside in the fresh air, the soccer stadium isn’t as appealing as it used to be, the mall doesn’t hold as much fascination and that’s mainly because kids meet-up online.  It’s far more fashionable to chat online than meet-up!

Only twenty years ago teens were spending much more time outside, enjoying fresh air and sporting activities rather than swiping through social media.  Yes, times have changed significantly, however that’s not to say that our kids these days can’t still enjoy the best of both worlds. We know from a 2011 study that teenagers now spend as little as an hour a week outdoors on exercise (Bureau of Labor Statistics)

So – what can you do as a parent to counterbalance this?  There is simply no point in removing technology from your teen because you then enter the danger zone of excluding them from their friends.  However, you can lay down some ground rules:

My Teenager has An Addiction To Technology!

Does that sound familiar?  Well, you are not alone. We know that teenagers are spending hours on their screens.  There is a well-known data project that has been monitoring the lives of teenagers for the past ten years. The Pew Internet and American Life Project has been busy looking at the behavior of teenagers and at the way they use their mobile phones, tablets and other technology (the project was updated again in 2015).

The research identified specific behavior of US teens and here are some interesting findings from the reports:

So, we can safely say that mobiles are definitely the communication preference for teenagers and they’re not going anywhere!

We can probably assume that most teenagers use Facebook straight after school and then later on at night, as they shouldn’t be using it during the school day!  They also tend to love multiple chats going on at once.

However, there are huge dangers to Facebook too.  Teenagers pride themselves on the number of friends they have online – the more the merrier.  Privacy though, remains an issue and many teenagers get requests for friendship from people they have never heard of.  This is where it’s vital that you do step in and make sure that your teen is using social media safely.

On the positive side, you could say that mobile phone technology helps adolescents to present themselves in a more positive way.  They can post great images of themselves because they can be more selective with photographs and videos but there is obviously the dark side.  Online social networking is renowned for bullying and because it’s done through technology, there’s no face to face required.  Bullies thrive on this; it makes those who are susceptible easy targets.

If you think your teen may be susceptible or you notice a change in behaviour you must act on instinct.  Bullying has always been an issue but mobile phones and online technology makes it far more prevalent and targets are easily accessible. With the advances in technology it is more and more important for parents to monitor devices, but how can it be done?

Take Control Of Their Devices

There’s a saying, “If you can’t beat ‘em, join ‘em”.  If your teenager has a social media account, it’s really important to monitor it and one way of doing so is following their account.  However, be savvy, some teenagers don’t want mom or dad on their social media so they set up a secondary account.  You need to get to know your teens’ device and keep a check on it.

There are lots of apps that will help you check your teen’s device.  Apps such as
PhoneSheriff, MobileSpy and MobiStealth will help you monitor their behaviour online. Frankly, these apps are a godsend and worth their weight in gold, especially if you want to make sure your teen is safe online.

There are also various products you can buy online that monitor online safety.  One such product from Amazon.com retails at approximately $59 and comes from Router Limits.  This gives you parental controls for internet safety and it manages screen time as well, there are lots of similar products available too.

You also need to teach them internet safety.  How important it is not to leave their details online and how to use the privacy features.  Sometimes, the best way to do this is to sit with your teen and watch something that will capture their attention (we know it’s usually short!).

That may be so but actually, while today’s technology makes socialising different to how it used to be twenty years ago, there are still many aspects that are essentially the same.

Remember when you were younger and sitting in class at High School?  Remember that handsome guy in the row next to you or that pretty girl just in front of you?  How would you get a message to them if you really wanted to?  Well, not by texting on your mobile because you didn’t have one, you’d probably send a note to them which would be passed over by your classmates or you’d pass a message on through a friend.

Today, devices are used almost in the same but it’s technology that acts as the facilitator. Mobile phones make it easier for teenagers to flirt, gossip and be “cool”.  This type of technology makes it easier for someone who is shy or embarrassed to present a different side of their personality because there is something to “hide” between.  Some argue that tech could help to establish identity because the user has control over what they portray.  However, others argue that hiding behind a piece of technology could mean that you don’t see the real person!  It’s indeed very possible.

Consider this, because teenagers hide behind their mobile phones, when it comes to entering the big, bad world years later, their understanding of technology will be a powerful tool but how will their personalities have developed?  This is why it’s up to you as a parent to encourage face to face communication.

Engage your teenager in conversation (yes, it can be hard!), ensure they do actually talk to you and they make eye contact.  What we see today is teenagers grunting response while tapping on their tablet!  This is habit forming and hard to break.  What makes it harder is adults are also guilty of the same thing!  If we’re all too busy looking at our mobiles and tablets – how on earth can we expect our kids to act differently?

So what can you do?

Additionally, we know that 45% of US businesses check job applicants by looking at their social networking and as many as 35% reject people just by looking at what they get up to on these sites.  Thank goodness no-one did that twenty years ago!  However, we are in 2017 so it’s very important that parents do play an active role in what their teenager is doing.  It’s also worth remembering that what goes on Facebook is there forever so any employer can access it, especially if Facebook settings are not set to Private.

Finally, it’s important for us to remember as adults that we all had our own advances in technology when we were youths.  The telephone became the source of many arguments during the 1960’s, 1970’s and 1980’s when teenagers would fight over who’s turn it was to use it!  The television had the same impact, especially when two or three favored shows were on at once and this was before video.

The point is, every type of technology through the years changed teenagers and their communication.  Whenever technology changed in the past, parents would panic and express their concerns even over health! Actually, the changes have always been generally positive especially in time.  The same way that today’s technology will have benefits and prove positive…in time!

Before we leave you – here are a summary of action points for you to try if you feel you need to:

We’d love to know what you think – is today’s technology too accessible to teenagers?  Was it better twenty years ago or do you embrace your teen’s knowledge of technology?