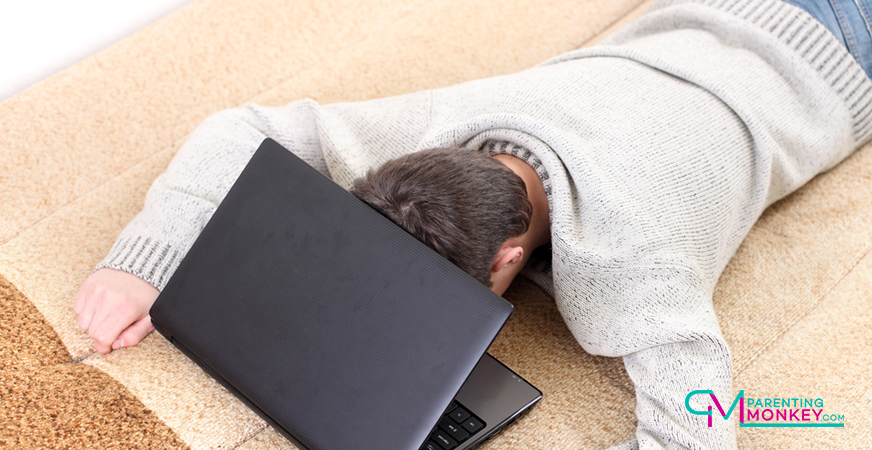 My Teenager Is Sleeping A Lot, Is There A Problem?

Is there such a thing as sleeping too much?

As an adult, you try to figure out how to get more rest.

However, do you remember what it’s like to be a teenager?

The carefree lifestyle of a teen allows them to stay up all night playing video games and surfing the web. They negate adulthood responsibilities, even if just for a short while.

Being a “kid” is all about living a carefree lifestyle. Sleeping late and being nonchalant in life what teenagers are all about. So, how does a parent know if their child is sleeping too much?

Since teens tend to have a habit of sleeping longer, it may be difficult for you to identify the range of normal and abnormal. Thankfully, there are plenty of studies to fall back on.

In general, studies have shown that teens aren’t getting enough sleep. The body and brain is still growing during these formative years. This activity requires the need for more sleep.

Each child is different. Their specific needs can be determined by many factors. Do they play sports or take meditations that are sedating? These factors can increase the need for sleep.

According to Nationwide Children’s Hospital, the average child sleeps 7 to 7.5 hours a night. However, they found that a child needs at least 9 and 9.5 hours, maybe even 10 hours to function well.

Teens 13-18 years old require a bit more sleep due to their obligations at school, home, and with any electives.

Is It Possible To Get Too Much Sleep?

Yes! Your child can sleep too much. If they sleep too little, then they will often make up feeling unrefreshed and cranky. However, sleeping too much can also produce the same effects.

As a parent, it may be difficult to decipher what is hormonal and what is a sleep disturbance. Being tired and irritable can be blamed on sleep.

Too much isn’t always a good thing. According to Sleep.org, if a child goes beyond 10 hours of sleep, they are messing with their circadian rhythms.

Think of the circadian rhythm as an internal clock. It operates on a 24 hour schedule. This clock allows the body to anticipate and prepare for regular changes.

This clock is important in regulating the body’s metabolic processes. When your body is on a schedule, messing with that schedule can cause devastating effects.

For instance, sleeping in more than two hours on the weekend can get the rhythm of the internal clock off. The body will want to stay awake it should be sleeping and vice versa.

Too much sleep can mess up your system. Add an internal clock that has gone array with teenage hormones and it’s a recipe for disaster.

Sleeping Too Much Can Indicate Bigger Problems

If a teen is consistently sleeping more than the allotted time, a parent must do a bit of investigation. If their mood is also poor, then you must consider all the options.

Depression and other mental disturbances affect teens too. Mental problems like depression and anxiety are not uncommon among this age group.

In fact, having a circadian rhythm that is messed up can put a person into a depression. Those late nights of cramming for a test and early morning routines can be overwhelming.

Sleep is not something that can be added to or taken away from like an equation. It’s a requirement for the body to function. However, when a child is sleeping continuously, there is a problem.

Depression affects more than 20 percent of teens, which means one out of five will suffer. A trip to the doctor’s office is warranted if a child is sleeping way too much.

There are no test that can verify if your child is depressed. Doctors go on their behaviors and how they differ from their normal lifestyle. They look for things like:

Certain things can cause depression too. For instance, are they being bullied at school? How is their home life? There are many things that can cause a person to be depressed.

The family history is another key element in discovering depression. Is there a significant history of depression and mental illness in the family? Sometimes, depression happens for no specific reason.

If the depression is caused by circumstantial elements, change can often ease the effects.

According to Dual Diagnosis, 38 percent of those with mental illness will drink alcohol and 44 percent turn to drugs. When your child is sleeping too much, you need to get to the bottom of the problem.

Trending Now:  The Difference Between Teenage Brains and Adult Brains

The constant need to sleep may indicate you’re dealing with a mental illness. Only a doctor can diagnose this condition and it warrants further evaluation.

Your Child May Have A Sleep Disorder

Teenagers can be just as affected by sleep disorders as the next person. Sleeping too much or not enough can be a sign of such an ailment. A “sleep study” can identify any problems.

Only a physician can order such an evaluation. However, if your teen is sleeping constantly and complains about not being refreshed after a full night of rest, it could indicate a sleep disturbance.

Do they have any other abnormal sleeping behaviors? Do they sleepwalk or talk during their sleep? This can indicate that their sleep is not restful and their bran isn’t shutting down.

Your child may be exhausted and sleeping more because they have taken on more than they can handle. Is their schooling being affected by a part-time job?

Teens often get involved in sports, dating, working, and all the other “fun” things that make these times so enthralling. However, their load can be overwhelming.

As a parent, it’s important to say when enough is enough. Remember, they are not grown yet. They still have a few more years at home. Perhaps, football looked like a great choice, but it’s too much.

Knowing When To Get Your Child Help

Sleep disturbances are not gender specific. They happen to both men and women equally. Constant fatigue is a medical problem. Look for the following signs:

Heading to the local clinic may not be enough. If your child is suffering from sleep disturbances they may need testing to get to the root of the problem.

Trying to separate normal teenage behavior from an actual problem may be hard at this age, but it can be done. Sleepiness and staying in their bedroom constantly is never a good sign.

If you have a question or concern about your child and their sleeping schedule, be sure to comment below.