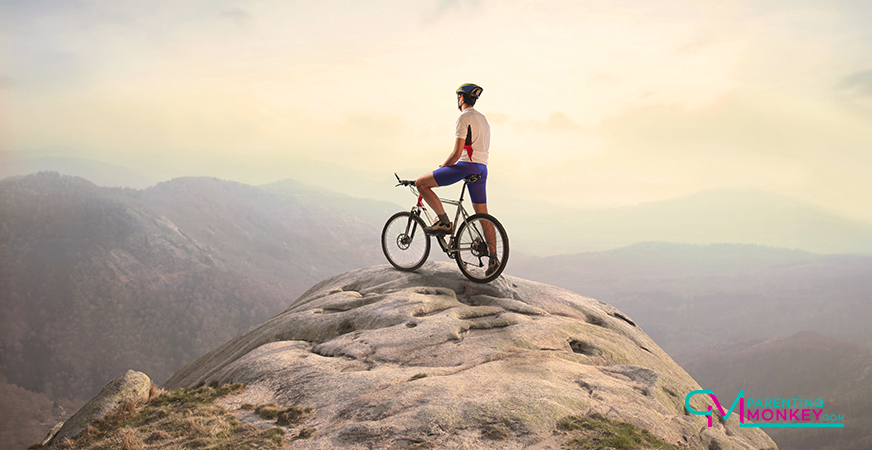 What can kids accomplish with a bicycle? Perhaps, with two wheels and a whole lot of vision, teens can change the whole world–or at least better their own lives.

Ahead, you’ll find five incredible stories about young people who have used bicycles for good. The teens in these accounts have achieved dreams and helped others.

These stories will bring a smile to your face, and they’ll encourage your own teens to do big things. When you’re finished reading, you may want to check out our best bike for teens review so your kids can bring their own cycling dreams to life.

2,740 miles lie between the Atlantic Ocean at Folly Beach, South Carolina, and the Pacific Ocean at San Diego, California. In 2015, 16-year-old Leah Adelman determined to pedal every one of those miles.

Adelman undertook this adventure to raise money for Girl Up, a campaign of the United Nations Foundation. Girl Up promotes education, health, safety and community action among teenage girls around the world.

The teenage cyclist set aside six weeks for her bicycle journey, and at some points on her trip, she rode more than 80 miles a day. The grueling experience included travels through both the Rocky Mountains and the Mojave Desert.

Adelman’s impressive cross-country bike trip raised over $5,000 for Girl Up.

On July 15, 2013, a young girl was kidnapped from her front yard in Lancaster, Pennsylvania. A two-hour search, involving both police and community members, commenced.

Two of the people involved in the search were 15-year-old Temar Boggs and his friend. The two rode their bikes around the neighbourhood to look for the missing girl.

The pair spotted the five-year-old in a vehicle, and they took off after the driver. Every time the car turned around, the teens followed.

After 15 minutes of being pursued by the cyclists, the kidnapper seemed to give up. He let the child out of the car and sped off.

The girl approached Boggs and his friend and asked for help. The duo swiftly returned the child to her anxious family members, who were extremely grateful for the cyclists’ help.

Character Building in a Bike Shop

If you need to have a bike repaired in the Washington D.C. area, you can take it to Gearin’ Up Bicycles in the city’s Eckington neighbourhood. This isn’t an ordinary bike shop; it’s a nonprofit organization dedicated to helping youths make something of themselves.

Gearin’ Up’s program gives kids and teens the opportunity to become bike mechanics. They learn to repair customers’ bikes and rebuild used bikes that can be sold in the shop.

This program equips students with practical skills, gives them purpose and focus, and opens up opportunities for mentoring conversations. In addition to the adult staff, as students gain experience, they, too, can mentor younger participants in the program.

Teenager Hannah Jordan of Tulsa, Oklahoma, always thought that it would be interesting to participate in competitive sports, but a rare mitochondrial disease kept her from being able to join a team. In 2015, however, Jordan was inspired to try cycling.

Getting on a bike was life-changing for Jordan. By 2017, she was a nationally ranked junior cyclist.

Trending Now:  How Do I Get My Teenager More Interested in School?

Although Jordan races among top youth cyclists, her riding brings extra challenges that most competitors never have to worry about. She is always hooked up to a G-tube that delivers life-saving glucose to her system.

Most of the time, she totes a backpack that contains her G-tube equipment. During competition, she has a special jersey that holds the medical gear without compromising her aerodynamics.

Known as the Hannimal, Jordan hopes to represent the U.S.A. at the Olympic Games someday.

The teens who are imprisoned at the Correctional Reception Center in Orient, Ohio, can’t do much about their current situations. Tried and convicted as adults, they are now serving their required sentences.

A group of them does hope to change the future for others, however.

Through a project called Ride Out, the teens prepared hundreds of bikes for foster children during 2017; other Ohio prisons participated as well. Along with encouraging notes, the bikes were sent to foster kids throughout Ohio.

Teen participants hope that their gifts have encouraged the recipients to make right choices and maintain a positive outlook, even when life seems rough. They don’t want those children to end up in prison like them.

Have these stories given your family ideas of ways to change lives using bicycles?

From riding bikes to building them, teens can make a difference in their communities and throughout the world. There’s no limit to what a kid with a bike and a vision can accomplish.