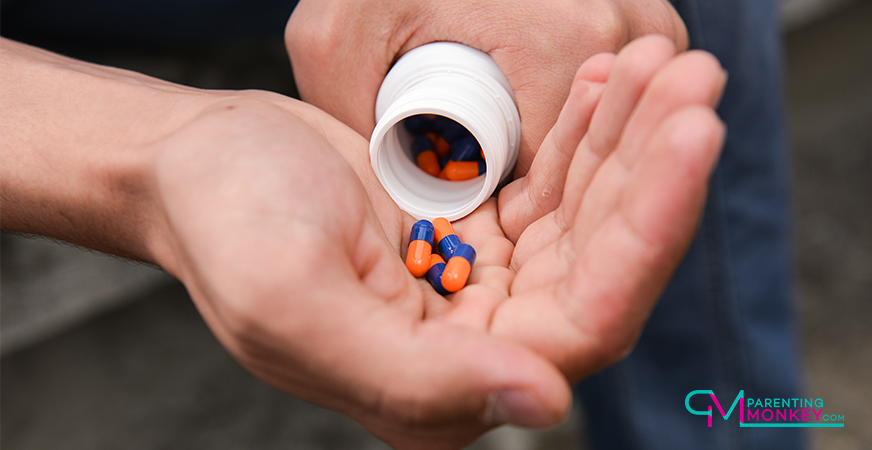 Let me guess. Your teenager did not order the Kale Salmon Salad when you went out to dinner last night. With those chicken tenders and french fries, the last thing on their mind is teenage vitamins.

But are teenagers’ bodies automatically healthy because they are young? Or do teenagers need vitamins to maintain their health?

The Purpose of Multi Vitamins

Vitamin supplements are used to treat or prevent vitamin deficiencies in teenagers due to a poor diet or certain illnesses. Vitamins and minerals are important building blocks for teenagers’ bodies to develop and they help to maintain proper health.

In order to get the most benefit from vitamin supplements, teenagers should take them every day. To help remember, it is best to take them at the same time during the morning routine.

The Most Important Vitamins for Teens

As we all well know, teenagers go through a lot of physiologic changes during these critical years, including growth spurts that create unique nutritional needs. Also, the changes in lifestyle that teenagers go through, in addition to their food habits, impact their nutrient intake.

Ideally, everyone would get all of the nutrition that their bodies need from whole food sources. Realistically, this isn’t going to happen.

So where do teenagers tend to fall short? According to Livestrong.com, the most common vitamin deficiencies in teenagers are:

So why do teens often come up short with these vitamins? According to Ulfat Shaikh, a pediatrician at the University of California-Davis School of Medicine, teens are at an increased risk of nutritional shortfalls because they often skip breakfast, eat a lot of meals out, and are more likely to consume sodas, artificial and processed snack foods, and fast food, rather than whole foods they would eat at home.

Sound familiar? Because of this, teenagers who take a multivitamin on a regular basis are giving themselves a reasonable insurance policy against having any nutritional deficiencies.

One study actually noted that teenagers who take supplements are also likely engaging in a more healthy lifestyle than those who do not. So, giving your teen a multivitamin may encourage them to make other healthy decisions in their life.

Does your child need a specific vitamin?

Because everyone’s nutrition needs are relatively similar, teens do not necessarily need to take a separate vitamin from what their parents take. According to the Denver Post, once a child hits the age of 12, he or she can take adult vitamins.

Also, a teen’s nutrient needs are similar for both males and females. So, while you may be loading up on several different bottles of pills for the whole family, you can likely stick to one that will cover the bases for everyone.

And be careful, don’t fall for marketing tactics. While a multivitamin may claim to give teens an energy boost, David Schardt, senior nutritionist at the Center for Science in the Public Interest tells us that our bodies do not get extra energy out of excess doses of B1, B2, B6, and B12.

In fact, the website of the manufacturer of the vitamin actually states that the vitamins only create energy by converting food to fuel (which our bodies do naturally anyway).

When it comes to skin health, supplementing with a multivitamin will not address that particular issue unless your teen is deficient in vitamin A, which is highly unlikely.

What are some pros and cons?

There must be some pros and cons to taking multivitamins, right? Let’s take a look.

While vitamin supplements are helpful in many cases, they’re certainly not meant to replace a healthy diet and lifestyle. Always make healthy living the first priority, and if supplement with multivitamins, make sure to read the labels so you know they are taken safely and properly.

Which specific supplements help with my teen’s development?

Yes, we did mention that teens can take multivitamins that are labeled for adults, but during the teenage years when the skeleton is quickly growing and cells are constantly dividing and multiplying, you need to make sure the multivitamin in your house has certain types of vitamins. A deficiency in growth-benefiting vitamins may lead to delayed development and weak bones.

Why is it so common to be deficient in vitamin D? Because it is hard to get from food sources, and many people aren’t exposed to enough natural sunlight each day for their body to produce it.

Vitamin D promotes the body’s absorption of calcium, which helps bones grow strong and form properly. It also regulates cell growth, ensuring that the cells that grow in and on the body are healthy.

Trending Now:  How Can I Encourage My Teenager To Spend Time With Family?

According to healthychild.com, cod liver oil delivers the body essential nutrients that are not easily obtained in sufficient amounts in a typical diet. Aside from helping supply vitamin D, the fatty acids are also critical for brain and nervous system development.

What’s more is that it contains 7% each of the omega-3 fatty acids EPA and DHA, which have several developmental benefits, such as:

A study done at San Pablo University in Spain found when adolescent mice consumed a normal-calorie diet that was high in saturated fat, they showed signs of significantly impaired learning and memory. On the other hand, feeding adult mice this same diet had no effect on their memory performance.

What makes these findings so special? The reason the old mice were not affected like the young mice is related to the rate at which the brain cells turn over during adolescence.

When the researchers further examined brains of the adolescent mice, they found permanent damage done to the hippocampus, which is the part of the brain that is related to memory. They also found that the mice had a loss of leptin, which is a hormone that supports cognitive function.

This is another vitamin that is not easily found in food sources, so it is best to have a supplement for proper development.

By now you’ll have realized that giving your teenager a multivitamin is a good way to help boost their healthy growth and development. While it is important that they do not fully rely on a multivitamin to get all of the nutrients that they need, it is good insurance to just cover all of the bases.

You do not need to find the most expensive vitamin in order for it to be effective. Just find one that is right for your family and take it as directed.

So what does this all mean? A multivitamin is going to do more help than harm to your adolescent child. Go ahead and incorporate one into their daily routine.